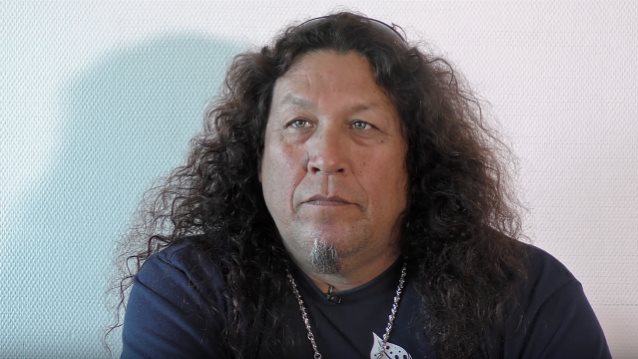 Chuck Billy, vocalist of the thrash metal band TESTAMENT, stopped by WSOU 89.5 FM in conjunction with the band's appearances in the New York City area to talk music and more with station music director Mike Colantuoni. Just hours before TESTAMENT's April 20 show at the Starland Ballroom in Sayreville, New Jersey, Billy spoke with the long-running metal and hard rock college radio station about the band's latest album, "Brotherhood Of The Snake", their tour with SEPULTURA and PRONG, the songwriting process and changes within the music industry. Billy also talked about the thirtieth anniversary of TESTAMENT's debut album "The Legacy", which was released on April 21, 1987, and revealed that the group is already working on songs for the follow-up to "Brotherhood of the Snake".

Speaking about the changes in the music industry over the course of the last thirty years, Billy said: "When I started, it was major labels and not necessarily independent labels. Major labels were big machines that had a lot of money to spend. And you had A&R guys looking for singles, back when videos were being played on MTV. That was a whole different world to where it's crossed over to where the major labels are more pop-orientated, where independents are the big labels, like the Nuclear Blasts and the Roadrunners and the Metal Blades, and all of them pretty much carried the torch for this genre of music. But then also just being able to create good records in your bedroom — being able to buy equipment to make good records, where before you'd get a lot of money to do a record and you'd just hand it over to a producer or someone in the studio, and bam, the money's gone. The times have changed, where now you look at what you have to spend, and big, big studios are going out of business because people can make good records in their bedrooms, and so those people are kind of just… they're going away. And as far as radio stations, in the '80s and the '90s, you could hear metal and harder music all day long on the radio, where now everybody's kind of limited to an hour, two-hour shows. And, really, overnight, it just changed. And at that time, major labels had a lot of metal signed to [them], and major labels were dropping bands left and right looking for the new NIRVANA and PEARL JAM and stuff like that. So that part of the industry really did change for metal, and I think a lot of the bands either gave it up or they just put their head down and just kept forging ahead, and that's what we chose to do. Once we finished our contract with Atlantic Records — we did six records with them — we just knew that, 'Okay, let's be harder and heavier.' And we were a little angry. Coming out of the 'Low' record — [which] was our last record at Atlantic — [and going] to 'Demonic', and it was just over-the-top [aggressive]. It was, like, night and day — a little angry and a little just… a little everything in it. So the whole industry did really change like that. But bands [like] us and ANTHRAX and a lot of those bands continued on, held tight and here we are today coming out of it all."

"Brotherhood Of The Snake" was released last October via Nuclear Blast. The cover was once again created by renowned artist Eliran Kantor, who also handled the art for the TESTAMENT's previous album, 2012's "Dark Roots Of Earth", and worked with bands like HATEBREED, SOULFLY and KATAKLYSM in the past.

Billy recently told Metal Wani that TESTAMENT's goal is to release the follow-up to "Brotherhood Of The Snake" in 2018.