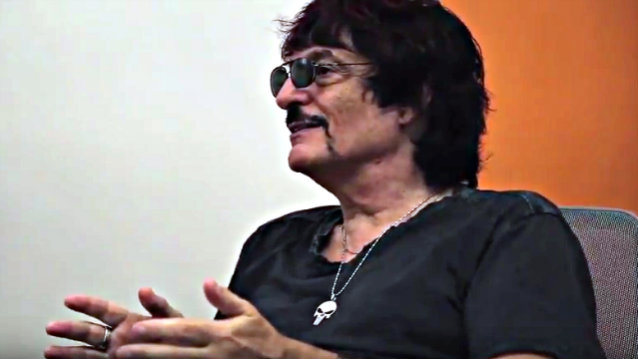 Heavy New York recently conducted an interview with legendary drummer brothers Carmine and Vinny Appice about their upcoming collaborative album, "Sinister", which is due on October 27 via SPV/Steamhammer. You can now watch the chat below.

"We used to be able to turn the radio on and find new bands," he continued. "So a lot of these bands that make it, some of the drummers may be fantastic. Like I heard a drummer. Vinny, these guys opened up for you, BLACK STONE CHERRY. I found out that they just, on their latest album, did one of our CACTUS songs called 'Evil', and that song has a lot of drum fills, and the guy was great. I don't know his name, but he sounded great. But that's what I'm saying — there's a lot of bands that have great drummers and stuff, but because you're not getting albums no more, there's no drum heroes, no new drum heroes. It's unfortunate, because we used to, growing up, I was doing VANILLA FUDGE and all that stuff in '73, '74, and then Stewart Copeland came out in '78, which is eleven years after I made it, but he was awesome, and here you have a new drum hero. But now that don't happen anymore."

Vinny also weighed in on the topic, telling Heavy New York: "I think at my age, I'm inspired out. I'm done with [being] inspired. There's just too many things out there. I was inspired totally by all the great drummers from the past. And, yeah, there's some great drummers out now, but that doesn't inspire me anymore. And even the thing, I can't do that [kind of stuff]; I don't play that. I've just got so much music in my life, I just concentrate on that, and I'm already inspired. [Laughs]"

Carmine continued: "We were both inspired by the greatest drummer of all time, Buddy Rich. He was the greatest. He did amazing things for the drum world. And there's nobody else like him. Because even these new players that are great, it's very clinical. Buddy played from the heart. He never even took a lesson. He was just unbelievable."

"Sinister" consists of a total of thirteen tracks, recorded by Carmine and Vinny together with distinguished colleagues. "Killing Floor" and "Future Past" feature the wonderful Craig Goldy (together with bassist Tony Franklin), Franklin resurfacing, together with Paul Shortino, on "Suddenly" and on "You Got Me Running". Shortino also lends his awesome vocals to "War Cry" and the programmatic "Monsters And Heroes", the latter also featuring BULLETBOYS guitarist Mick Sweda, while Shortino teams up with WHITESNAKE stringsman Joel Hoekstra on "War Cry". Talking of vocals: "Sinister", "Danger" (bass: Phil Soussan), "In The Night" (guitar: Ron "Bumblefoot" Thal) and "Sabbath Mash" (guitar: Erik Turner, keyboards: Erik Norlander) are all sung by Jim Crean, while Chas West recorded the vocal parts for "Killing Floor", Scotty Bruce featuring on "Future Past" and Robin McAuley on "Riot". The biggest surprise of all: Carmine himself doubles as vocalist on "You Got Me Running". Vinny says: "Carmine has been singing lead and background for years. He's a very good singer and I"m glad he sang one number on this record."

"Sinister" will be released as CD digipack, double gatefold vinyl, download and stream.