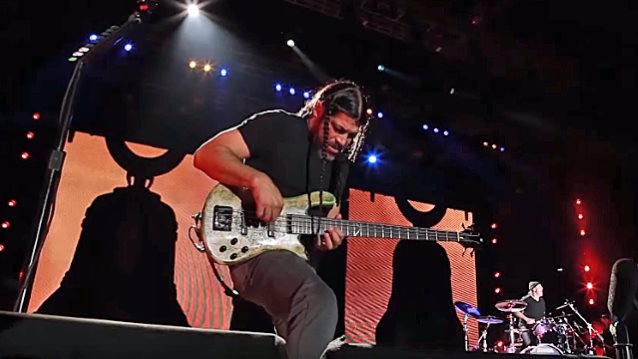 In a brand new interview with the KSHE radio station, METALLICA bassist Robert Trujillo was asked if he can see himself still playing with the band when he is in his seventies. The fifty-two-year-old musician responded (hear audio below): "We always say, okay, with METALLICA's music, there's a certain physicality to it, and the stages are big, so there's more [likelihood of] an injury. I mean James [Hetfield, METALLICA frontman] has already had surgery on his neck and his back. I think Dave Mustaine [MEGADETH], same thing. Corey [Taylor] from SLIPKNOT. All these guys… Oh, Tom Araya from SLAYER. Same — neck surgery. So heavy metal will take you down. [Laughs] You've gotta be ready for that."

Trujillo's latest comments echo those made by METALLICA drummer Lars Ulrich, who told Billboard back in November: "Whether we'll be able to play 'Master Of Puppets' in our seventies, I just don't know. With METALLICA, there's a physicality and a weight that has to be part of it. You can play it less heavy, slower — or you can realize that the music deserves that physical approach, and if the physical delivery isn't there, then maybe it's better not to do it."

When asked who his role models are for working past retirement age, Hetfield told Billboard: "Everybody mentions THE ROLLING STONES. They could probably play until they're a hundred and twenty. Lemmy [of MOTÖRHEAD] gave it all he had to the last breath. Bruce Springsteen, another guy I admire for his endurance. But Angus Young [of AC/DC] — that guy blows my mind. That guy sweats so much every night. I can't believe his head is still on his body."

The North American leg of METALLICA's "WorldWired" 2017 tour kicked off on May 10 in Baltimore, Maryland and is hitting stadiums in 25 cities before winding down in mid-August. Support on the quartet's first North American trek since 2009 is coming mainly from AVENGED SEVENFOLD and VOLBEAT, with GOJIRA taking over for the latter group for the last six shows.

Hetfield previously told the Nerdist podcast that METALLICA would cap its live schedule starting in 2017 at around fifty shows a year. He explained: "My body has told me to tell these guys that fifty shows a year is kind of what we can do, so make the best of those. And I think we all kind of agree in that. But fifty shows a year, that's pretty good. My body can handle that. Body, mind and spirit all need to kind of revitalize themselves at home, and days off for voices — things like that — so fifty shows a year, it goes pretty quick, I'm sure."