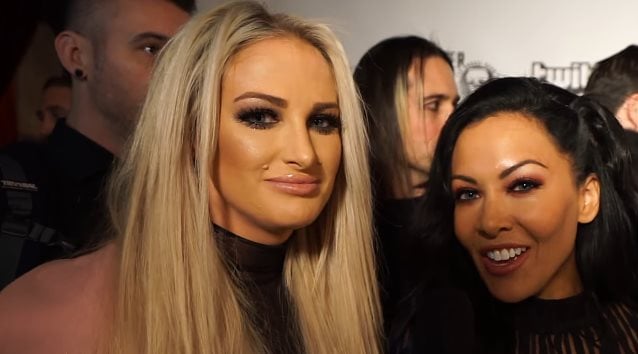 BUTCHER BABIES frontwomen Heidi Shepherd and Carla Harvey were interviewed by Louder Noise at the Revolver Music Awards, which was held on December 13 at Webster Hall in New York City. You can now watch the chat below. A couple of excerpts follow (transcribed by BLABBERMOUTH.NET).

On supporting MEGADETH on the fall 2016 leg of the "Dystopia" tour:

Heidi: "It was so cool. It was one of the best tours we've ever done. Dave Mustaine treated us like gold the entire time. He welcomed us to the tour, brought us a bunch of wine and vodka, which, obviously, we consumed immediately. [Laughs] But it was really, really great. A nice way to round out 2016 for us as well."

On whether they picked up any rock and roll tricks from touring with MEGADETH:

Carla: "We've been touring for five years straight with many, many legends, so along the way we have picked up a lot of rock and roll tricks."

Heidi: "I think one thing that I definitely picked up from Dave Mustaine is the respect. He shows respect to all the bands that he's out with. And we've never had anyone come in and welcome us the way that he did. So I definitely picked that up and I hope to pass that on, along with other bands we tour with."

On what fans can expect from BUTCHER BABIES in 2017:

Carla: "We've got a new album coming out. We hit the studio in February. We're in the middle of pre-production right now. We're really excited because we're trying all kinds of new things. It's our third album, our third baby, so we're stoked."

BUTCHER BABIES' third album is tentatively due in late 2017 via Century Media.

The band's second LP, 2015's "Take It Like A Man", was produced by Logan Mader, who has previously worked with FIVE FINGER DEATH PUNCH, DEVILDRIVER, CAVALERA CONSPIRACY and GOJIRA.