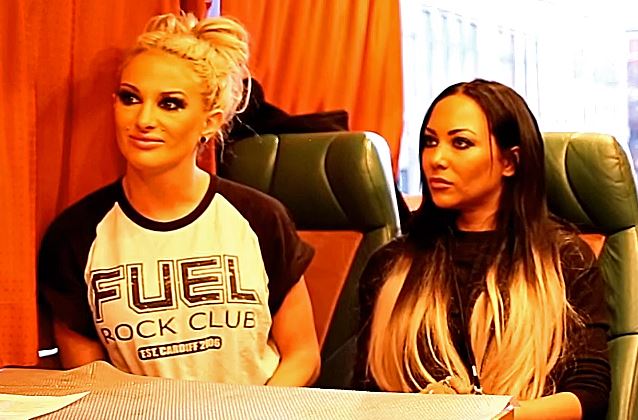 DGM TV recently conducted an interview with BUTCHER BABIES frontwomen Heidi Shepherd and Carla Harvey. You can now watch the chat below.

Asked for their opinion of controversial Republican presidential candidate Donald Trump, Carla said: "I think it's very irresponsible of him to even be running for president, to even be taking a vote away from someone who is a good candidate. It's a completely bizarre thing that people even look at him as if he would be a good candidate. He's horrible to women, he says horrible things about everyone, he says horrible things about handicapped people, people of color…"

Added Heidi: "I can't even believe it's gotten this far. It's honestly disgusting. I remember when he first announced he was gonna run for president, I was, like, 'Oh, that won't even make it past the first anything.' And it's gotten this far, and it's a terrifying thing. All Americans that are against him are, like, 'All right. We're going to Canada. We're outta here.' But I see a lot of really, really bad things happening in this world if that happens. To us, we take these things very seriously. I grew up in politics — my mom's a politician — so, for me, kind of seeing it… I look at [the Republican] party as they would be nominated for an Oscar for 'Best Comedy' or something like that. To me, it's the biggest joke, and I'm not impressed. And I don't think that most people are."

Continued Carla: "It bothers me too that you see… He really just kind of perpetuates all this hate in people, and to hear some of the things that people say in support of him, you see how much hate there still is in the world and in the States. And it really bothers me, because I like to think of the States as a place that has so much compassion. I mean, we're a new country. People from all over the world came there for a better life, and all kinds of immigrants came there and built up our country to be what it is today. And this person is just… He's a hatemonger and he is really fueling the racism. And, like I said, the things that he says about women are just ridiculous."

Heidi went on to say: "If he is nominated, I don't see his life lasting very long."

Heidi stated: "There's a lot of conspiracy theories. Who knows? I'm just hoping and keeping my fingers crossed that he drops out [of the race]."

BUTCHER BABIES' second album, "Take It Like A Man", was released in August 2015 via Century Media. The CD was produced by Logan Mader, who has previously worked with FIVE FINGER DEATH PUNCH, DEVILDRIVER, CAVALERA CONSPIRACY and GOJIRA.