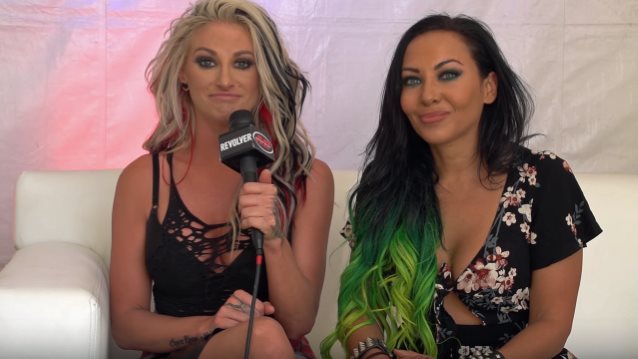 Speaking about the BUTCHER BABIES sound, Heidi said: "I think what's great about BUTCHER BABIES is we don't really stick to one sort of genre — we actually combine a lot of BLACK SABBATH and SLIPKNOT into our music, and so you can kind of hear the influence of both. We write together constantly, and so writing together, that's the beauty of it — bringing in the influence from so different genres and so many different eras of metal."

Added Carla: "It's cool to have a friend that we can say to [each other], 'I don't know what you like at all, and maybe you don't like what I like, but let's put those sounds together and make something that's very new and unique and very 'us.''"

BUTCHER BABIES are currently working on their third album for an early 2017 release via Century Media.

The band's second LP, last year's "Take It Like A Man", was produced by Logan Mader, who has previously worked with FIVE FINGER DEATH PUNCH, DEVILDRIVER, CAVALERA CONSPIRACY and GOJIRA.