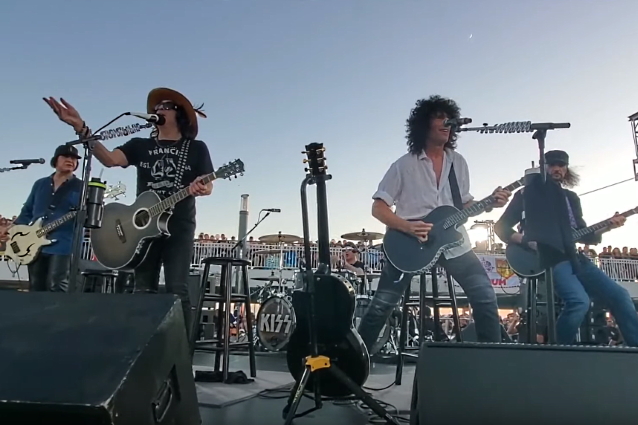 Ex-KISS guitarist Bruce Kulick rejoined his bandmates aboard "Kiss Kruise IX" this week to perform an acoustic version of "She" in the round. Check out video footage below.

In 1984, Bruce joined KISS, where he remained as their lead guitarist for more than a decade, accompanying the band on the "Animalize" tour and continuing with the band until the 1996 reunion tour. Bruce is heavily featured on "Kissology – Vol. 2" and "Vol. 3", the band's DVDs spanning their historic 40-year career.

Two years ago, Kulick revealed that he had to take band politics into account when pitching a song to Gene Simmons and Paul Stanley during his 12 years in the band.

Speaking to Hot Metal, the 65-year-old said he could never play a song idea for both Simmons and Stanley — he had to chose which one would give him the best chance of success.

"During my years with KISS, it was always a challenge to make Gene or Paul really zone in and say, 'I wanna work on that,'" Kulick said. "Then the issue with them was, if you played something for Gene, you can't play it for Paul. You know what I mean? It was like you had to pick and choose your battles and everything.

"Anyway, that was always like an interesting dynamic but understandable. Groups are very much like that. Just like within a family you know, you can tell one brother one thing but you wouldn't mention that to the other ... your sister or whatever."

During the extensive chat, Kulick also discussed going out socially with Paul Stanley years before joining the band — because brother Bob Kulick was a friend of the Starchild.

"Paul was a huge rock star living like a king in New York City," Bruce recalled. "Bob would go, 'Come on along, let's go', we were in Queens we'd hang out, 'We're going to the movies with Paul Stanley,' and everyone was like, 'Wow, that's kind of cool.'

"That was kind of weird. I'm not saying I really got to know him well. You know when you have that level of fame, you're very carefully with your circle of people you hang with. But that helped when Paul realized, 'You know, I'm hearing good things about Bruce, not only from Bob, from other musicians in L.A.' That's how I really got my start, so I'm grateful to my brother obviously for the introduction but the rest was all my own."