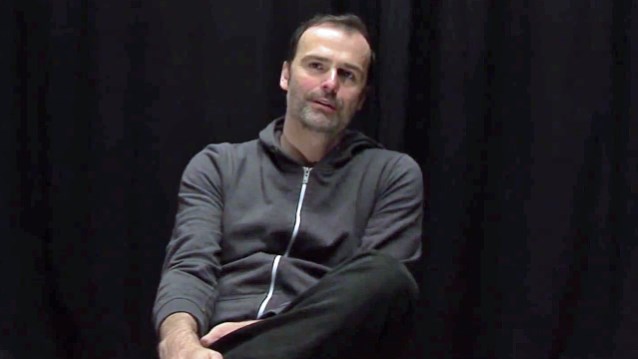 David E. Gehlke of DeadRhetoric.com recently conducted an interview with BLIND GUARDIAN frontman Hansi Kürsch. A couple of excerpts from the chat follow below.

DeadRhetoric.com: Have to start with this: It's always been the four of you guys, now you're a quintet. What made you take the leap and add [Dutch bassist] Barend [Courbois] to the band?

Hansi Kürsch: You know what? It was just a misunderstanding in general. It was just meant to be an introduction for people who wanted to know something about the bassist. We thought, "We'll use this opportunity to introduce him via our Facebook and homepage." People misunderstood. He has the same status as [former session/touring bassist] Oliver Holzwarth. It was a complete misunderstanding and I was, like, "Something is going wrong here!" Jason, our webmaster, was completely irritated and confused by this as well. I misunderstood him and said, "Of course we're going to promote him and introduce him." He was somehow thinking about the confusion which might be what created it, but I didn't see it, so I said, "Spread the news. All good." It was obvious to me that he's not the fifth band member, and he's fine with his status, like Oliver was. We don't need that. Even though I doubt I'm going to play the bass again, it's still the four of us.

DeadRhetoric.com: I'm glad you cleared that up. Amazing how easily things get misconstrued on the Internet.

Kürsch: The Internet is having the lead in confusing people and making more of a story than there is. I read the story over and over again, and we just announced Barend, or "Bear," as we call him, has the same status as Oliver. He played the bass on the new album, and he is also taking part in our concerts. It was just an introduction and yes, you can consider him the BLIND GUARDIAN bass player, as [touring member] Michael Schüren is considered our keyboardist. I don't have a problem with that in general, but it's just amazing to see how things spread quickly, and how they are misunderstood, and what people are creating out of it. Some people start complaining about it, and even if he was the fifth member, that's our decision. But he's not. [Laughs] If we feel so, we can do so. Why not? What's the problem with it?

DeadRhetoric.com: How do you view the '90s now? You were playing such an unfashionable style of metal, but you had so much success. Do you look at it with amazement?

Kürsch: [Laughs] I look at every part of our career with amazement. Nothing ever seems to be very far away when we're talking about the years. I still sense the excitement when we did "Battalions Of Fear". The '90s were somehow strange, because, yeah, as you said, the scene was going in a different direction and everyone said, "Metal is going to be dead soon." There were not a lot of bands having success, but for us, it was going in the opposite direction. We felt somehow privileged, but on the other side, we considered that as proof we did the right thing. It was doing what we believed would be good. It was never trying to figure out where the wind was blowing and which way it would lead us. We did what we felt was the best for the band. This hasn't changed over the last 20 years. Whatever we're doing we truly believe in. Of course, failure has been an option. This has been the case in the '90s, and today, but in general, as an advice for any band, if you do that, you fail because of your own fault.

Read the entire interview at DeadRhetoric.com.