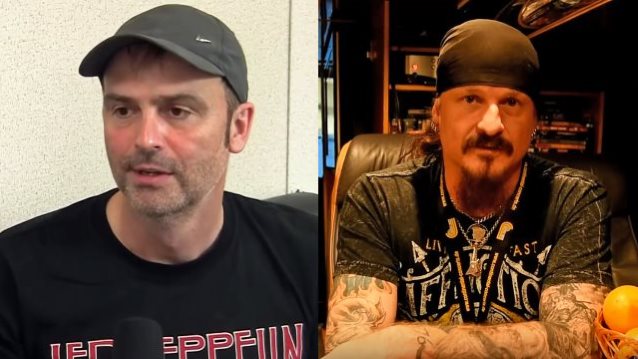 BLIND GUARDIAN frontman Hansi Kürsch has confirmed that he and ICED EARTH mainman Jon Schaffer are working on material for the long-awaited third album from their side project DEMONS & WIZARDS.

DEMONS & WIZARDS was launched in 1997 and has released two full-length albums so far: 2000's self-titled effort and 2005's "Touched By The Crimson King". The latter was partially based on the "The Dark Tower" series of books (written by Stephen King) in which the Crimson King is the main antagonist.

In a brand new interview with That Drummer Guy (a.k.a. Josh Rundquist), Kürsch revealed that songwriting sessions for the follow-up to "Touched By The Crimson King" have officially begun. "We exchanged first ideas," he said (hear audio below). "And we just had to make a stop in being creative for the moment because Jon… ICED EARTH just started a new touring route; their [new] album ['Incorruptible'] has just been released last week, so he will be very for the rest of the year, while for me, it's more of a creative act which is first priority. But we are continuing exchanging ideas over the next, let's say, eight months, and then we will see how far we can get. But once he's finished with his touring for ICED EARTH, I'm pretty sure we will spend some very realistic and very valuable time together either finishing the songwriting of DEMONS & WIZARDS or even doing the whole production. That depends. Usually we're very quick once we're together. And it's just great to work with such a gifted person which I call a very, very close friend of mine."

As for what fans can expect from the next DEMONS & WIZARDS album, Hansi said: "You will be surprised, I'm sure. These first two [songs] we've worked on, they are quite interesting. I'm really looking forward to spend some more time and getting deeper into the subject. Because even though ICED EARTH and BLIND GUARDIAN are quite similar in many ways, Jon and I are, songwriting-wise, different persons and by coincidence and pure luck and probably by friendship, the chemistry is pretty good once we are together. And what comes out is a blend of these two bands, which [one] would expect, but there's something more. And I like to go for this something more."

Hansi also sounded very optimistic about the possibility of DEMONS & WIZARDS live performances in support of the upcoming album. He said: "That really depends on how fast we are with BLIND GUARDIAN, obviously, and how the schedules will be worked out. But it would be a shame not to do so, at least being on the road for a festival season and doing some smaller club shows, for example, just in between… There should be a gap, and we are working on this gap. It would be a waste not to do so."

According to Kürsch, the main motivation for him and Schaffer to work on new DEMONS & WIZARDS material and prepare for possible live shows is "the need to do so and for the fun to do so. And this is always a very good starting point. We don't have to do it, there is no pressure behind us in doing so," he said. "Obviously, there can't be any pressure, because the last album is, I think, twelve years old already. And we just did some minimal touring for the first album and did not even do any proper touring for the second album. So I could imagine that just the performance will be so different from what either BLIND GUARDIAN or ICED EARTH is doing that this might attract a lot of people. I'm curious myself to figure out what we would come up with this time, because there's a long time between our last show which we played together, which is probably seventeen years ago, eighteen years. And we have to find the right people and the right moment, but the whole thing, once it is built up, will be, I think, very skillful."

"Touched By The Crimson King" was released in Japan in September 2005 with the following bonus tracks: "Lunar Lament", "Wicked Witch" (slow version) and "Spatial Architects". The CD also included the "Terror Train" video. The disc featured an appearance by HALFORD and SEBASTIAN BACH drummer Bobby Jarzombek.

Schaffer said in a 2009 interview that he felt "Touched By The Crimson King" was a bit rushed and he was determined to do things differently next time around. "We had this window of opportunity where we had to get it done and we kind of let time dictate the schedule instead of our feelings, and that was probably a mistake," he explained. "I mean, I'm proud of that record and it sold killer and it's a good album, but I think Hansi and I are capable of a lot more, especially when we get back to the root reasons of why we did this thing together."

"Incorruptible" was released on June 16 via Century Media. The cover artwork for the disc (as well as additional illustrations to every song) was created by David Newman-Stump from Skeleton Crew Tattoo (pencil illustrations) and Roy Young (colors).

BLIND GUARDIAN will release a new concert album titled "Live Beyond The Spheres" on July 7 as a 3-CD and 4-LP box via Nuclear Blast. The set will include material recorded at various shows during the band's European tour in 2015. It will contain old classics, new tracks as well as songs that were very rarely performed during BLIND GUARDIAN's live shows.