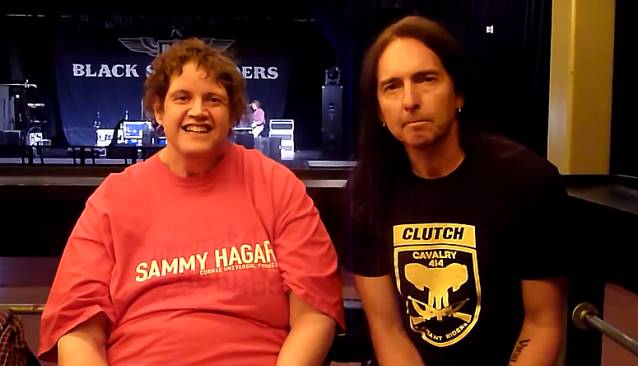 Alex Richter of Hard N Fast conducted an interview with BLACK STAR RIDERS guitarist Damon Johnson when the band played the Theatre Of The Living Arts in Philadelphia, Pennsylvania on June 20. You can now watch the chat in two parts below.

Commented Gorham: "I am very sad to see Marco go. We have been together in a band now for almost 20 years and Marco is my brother and we wish him well for the future. It's an amicable parting of ways and we all respect that Marco wants to do other projects outside of BLACK STAR RIDERS and there just isn't time to do both."

Added Warwick: "Marco will always be part of the BLACK STAR RIDERS family and a true friend of ours.

"We are very happy to introduce Robbie Crane to everyone as the new BLACK STAR RIDERS bass player. The guy killed the audition and we can't wait to get on stage with him on our European run starting mid-July and then, of course, in the studio in the autumn for the recording of the second BLACK STAR RIDERS record."

Stated Mendoza: "I loved my time in BLACK STAR RIDERS and want to thank all the fans for making the last year on road so successful.

"I am sorry to be leaving the band, but I feel it's time for me to pursue other avenues, some of which I have already been working with, all of which I am very excited about.

"I wish the guys all success in the future and I am very happy that my friend Robbie Crane will continue to blaze with BLACK STAR RIDERS."

BLACK STAR RIDERS's debut album, "All Hell Breaks Loose", sold around 2,200 copies in the United States in its first week of release. The CD landed at position No. 5 on the Top New Artist Albums (Heatseekers) chart, which lists the best-selling albums by new and developing artists, defined as those who have never appeared in the Top 100 of The Billboard 200.