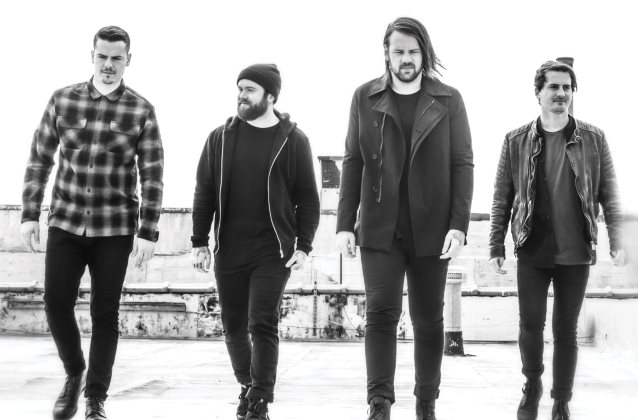 Columbus, Ohio-based hard rockers BEARTOOTH have released a video for "Sick Of Me", directed by Marc Klasfeld and featuring live footage shot by Kevin Slack.

The documentary-style clip follows the stories of four individuals struggling with depression and how each has channeled their energy into something positive to overcome it.

"It's rare that I am able to create a music video that allows other people to get their story across with such a positive message," notes Klasfeld. "I really hope it can help anyone afflicted with depression in some way."

BEARTOOTH frontman Caleb Shomo comments on his own battle with the disease: "Depression and anxiety isn't something you just get away from. It's just inside you. For me, it's just always in my brain churning. It's about fighting it and overcoming it; you can't run away from it. You have to deal with it. This song is a big way to help. At least for me, music has been implanted in my body and what I've connected with. When I go on stage, everything goes away. If you can choose that you will not let depression and anxiety run your life, you're going to make it. It's your body and your life and your choice."

Adds the band: "We would like to thank our guests Ernesto, Katie, and Portia for sharing their stories of their struggles with depression.

"If you or someone you love is experiencing signs of depression, please visit NAMI.org. To support, you can purchase a limited-edition 'Sick Of Me' t-shirt here. 100% of net proceeds will be donated to NAMI."

The deluxe edition of BEARTOOTH's latest album, "Aggressive", will arrive on May 26. The set will contain six bonus tracks, including an acoustic version of "Hated". Also included are an acoustic version of "Sick Of Me", live takes of the album's title track and "Rock Is Dead" from a BBC session, as well as concert renditions of "Fair Weather Friend" and "King Of Anything", recorded in the band's hometown.

For "Aggressive", Shomo again retreated to his home studio to write, perform and produce the album's twelve tracks, re-teaming with John Feldmann (THE USED, BLINK-182) for a bit of songwriting contribution and enlisting David Bendeth (KILLSWITCH ENGAGE, PARAMORE) to mix the release.