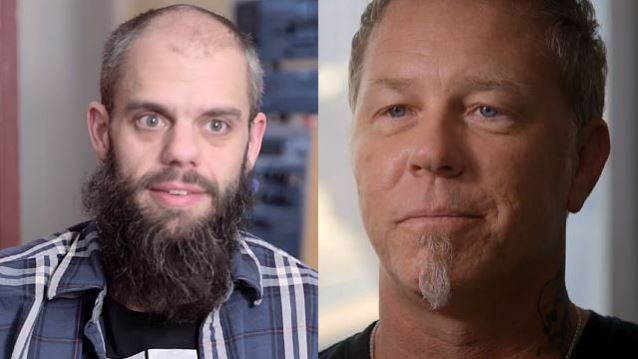 John Baizley recalled getting a phone call from METALLICA's James Hetfield while the BARONESS frontman was recovering after shattering his left arm in a horrific accident.

Baizley was riding in a tour bus with his BARONESS bandmates when the brakes failed in August 2012. The bus plunged 30 feet into a viaduct in the U.K., crushing Baizley's arm so badly that doctors considered amputation. He now has two 9-inch titanium plates, some 30 screws and more than a foot of wire holding everything together.

Hetfield, who was in the 1986 bus crash which claimed the life of METALLICA bassist Cliff Burton, called Baizley while the BARONESS guitarist/vocalist was in the hospital. John told Rolling Stone: "[Hetfield's] call was [as] important as every other call I got that week. I have since come to learn that, while I was in the hospital — roughly two and a half weeks, which felt like two and a half decades for me at the time — there were a lot of people who were nervous or somewhat reticent to call me; they didn't know what condition I was in, or they were concerned that I needed time or space. I really didn't. In fact, each time somebody called me from the States, it was a huge relief for me; it was a reminder that there was still a world out there moving on, and that in turn led me to believe that there was a place for me to work towards after my immediate situation was over."

He continued: "But it was very hilarious the way he called. It was late at night in the trauma ward; most of the people I was in the room with were elderly, and they'd gone to bed early. I wasn't going to bed at all, for some obvious reasons; it was very difficult for me to sleep. The nurse was an older lady, and she said, 'Somebody just called you — a Jim Hatfield or John Hartfield, something like that. I told him I wasn't sure if you were awake or taking calls.' I said, 'I don't know anybody by either of those names, but I don't care if they're trying to sell me a dishwasher or life insurance — bring me the number, because I need somebody to talk to, desperately!' So she handed me the little slip of paper with James Hetfield's name and cell-phone number on it. [laughs]

"So I called him up, and I had one of the most realistic and honest conversations that I had that week. He gave me obvious but very good advice. Coming from Hetfield, who'd been through a tragic bus-related incident, and things that were more severe than what I went through, his words had a little bit of weight to them. When he said, 'Don't worry; things will get better,' I thought, well, if it got better for him, it will get better for me. And I had many other conversations that weren't with METALLICA members, where people were telling me things I needed to hear, because I wasn't quite believing them myself at the time."

BARONESS's fourth album, "Purple", will be released on December 18 through Abraxan Hymns.