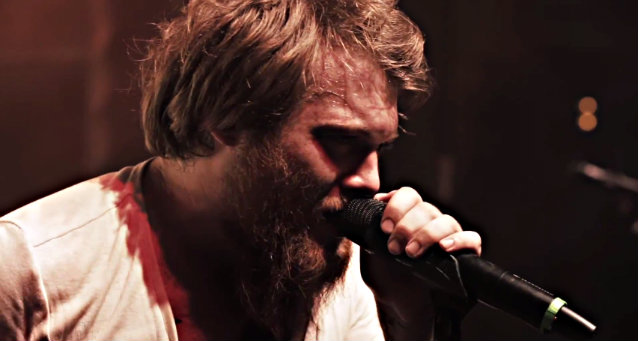 British metalcore act ASKING ALEXANDRIA just completed its most successful and high-profile tour yet as part of the main stage on the Rockstar Energy Drink Mayhem Festival. The band's new music video for the track "Moving On" gives everyone a small glimpse into the musicians' lives on and off that stage. It's their most honest and unfiltered video offering to date.

Comments ASKING ALEXANDRIA guitarist Ben Bruce: "For the first time in our careers, we are showcasing ourselves in the most sincere light possible. No drugs, no partying, no script and no bullshit. It's just the five of us completely vulnerable.

"No matter what the circumstance, being away from those you love and care about is very difficult and drags you down. Luckily for us, we have incredible fans that love and support us and help us through our toughest times.

"I hope this video gives you all a little bit of a look into our world.

"Thank you for all of your continued support and for keeping us going."

ASKING ALEXANDRIA's third album, "From Death To Destiny", sold 38,000 copies in the United States in its first week of release to land at position No. 6 on The Billboard 200 chart.

Speaking about the songwriting process for "From Death To Destiny", Ben Bruce told The AU Review: "I had a lot more fun, albeit having to pay a lot more money this time round.

"The first two records, being the main songwriter, I had my laptop, so I would go in to Garage Band and program in a drum beat that I thought would sound cool, and record over it and write a song that way. This one, we had no time off, so I was stressing out about writing this record. So I basically used one of my royalty checks to buy my own tour bus, and I ripped out the back lounge and half of the bunk area, and converted it into a fully functioning studio that had a vocal booth, a drum kit, live amps, mics, everything. So this time I spent a lot of time at the back of the bus with James [Cassells, drums], and we would just jam back and forth and record our jam sessions. That's basically how we wrote this album."