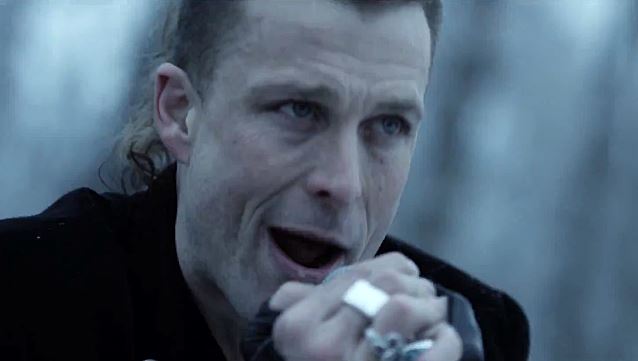 "Rise Up", the official video for the title track of the new album from Vancouver, British Columbia, Canada-based rockers ART OF DYING, can be seen below. The CD was recorded with producer David Bendeth (PAPA ROACH, BRING ME THE HORIZON, BREAKING BENJAMIN, ASKING ALEXANDRIA) and will be released this summer via Eleven Seven Music Group's Better Noise imprint.

The "Rise Up" video was produced by James O'Donell and Christopher Giroux and directed by Chad Archibald for Black Fawn Films.

"We pushed ourselves incredibly hard with this record," explains guitarist Tavis Stanley.

Adds frontman Jonny Hetherington: "We went to the studio with our producer, David Bendeth, thinking we had the album pretty much done, but he challenged us far beyond where we thought our limits were. In fact, a lot of the lyrical content on this album is about the idea of overcoming adversity. About taking yourself beyond where you thought you could go… about proving the naysayers wrong. Take the opening track, 'Best Won't Do', for example. It's basically a conversation between me and the son of a bitch who's telling me I can't do what I set my mind to!"

He continues: "The most important thing for me is connecting with people. I want people to leave our shows or finish listening to our album feeling something, and hopefully feeling inspired. Really, that's the most powerful, potent thing about music in my experience — and this album is my statement saying: 'I'm not going to go quietly, and nor should you!'"

Though the members of ART OF DYING are Canadian, the epicenter of the band's success has been in the U.S., with their album "Vices And Virtues" (2011, Reprise/Intoxication) spawning the hit singles "Die Trying" and "Get Thru This", both of which charted on U.S. mainstream, rock and alternative radio, and contributed to the band selling over 250,000 digital singles and 50,000 records.