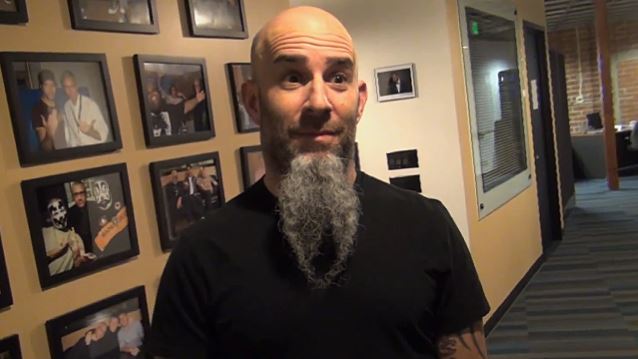 Niclas Müller-Hansen of RockSverige.se recently conducted an interview with ANTHRAX guitarist Scott Ian A couple of excerpts from the chat follow below.

RockSverige.se: These days, everybody's got a book out, you're out telling stories from your life, ANTHRAX posts studio reports on the new album. It's kinda like there are no secrets anymore. It's so different from, let's say, the '80s when you read Kerrang! magazine. How do you feel about that?

Scott: Yeah, I know! Like everything in life, there's good and bad to it. I think the good part of the Internet, the good tool, is that there's no middle man, so we don't have to rely on the media or the press or the radio, like you used to, in a sense. In the '80s, there were a lot of magazines that promoted this type of music, but they came out once a month or every two weeks. Now we can go on Facebook or whatever and tell people what's happening. You get instant response and you're able to respond back. That's something I find really cool. The idea that someone can write me something on Twitter and I can respond directly back to them and start a conversation, which we couldn't do before. I think of that from a fan's point of view, because I'm a music fan too. I think about when I was a kid, if I could've sent a message to Steve Harris [IRON MAIDEN] and maybe he would've written me back, even if just to say, 'Cheers! Thank you!', that would've been the coolest thing in the world. I'm still like that when I get an e-mail from Gene Simmons or somebody. I'll be e-mailing them about something and they write me back. I save all those because I think it's so cool that I have an e-mail from Gene Simmons. Things like that with the Internet, I really appreciate and I feel that we can use them to our advantage. On the other hand, I will agree with you, if there's a way and it's not reality, obviously, but if a genie came out of the bottle and gave me the option of abolishing the Internet and it would disappear like it never existed and nobody even remembered we ever had it and things went back to the way they were, I would prefer the old way, for sure. It's just proven — people used to buy records and now they don't. That makes a big difference in any musician who's making albums and it obviously makes a big difference in our lives as guys in bands. I definitely prefer the way when we used to make records and people would buy them. I definitely prefer that way rather than people stealing them or just listening for free on a fucking streaming service! To me, that's no way to get your fucking music! I prefer having an album or a CD in my hands and dealing with it that way and having a bit more mystique about the end. Case in point, KISS never could've done what they did in the '70s and kept their identities hidden now. I mean, look at GHOST. How long did it take before there were pictures of those guys all over the Internet? It wasn't very long. There just isn't that mystique thing about bands anymore. Only certain bands can really control it, like AC/DC. You don't ever see or hear anything about AC/DC until they decide that they're gonna say something. Even now, AC/DC is all on Twitter and all over the place because they've got tour dates coming and it's kinda weird and it's almost like it's too much. I preferred it when you didn't hear anything and then maybe once in a while you would hear something, but that's only one man's opinion.

RockSverige.se: Do you remember what you did with your first royalty check?

Scott: We never got royalty checks, because everything was advances. Once we signed to Island in '84 and "Spreading The Disease" came out in ´85, we would get advances. You would get an advance for your record, for your t-shirts, publishing advance and you had to split up that money. Obviously, you had to save money to pay for the album, but whatever was left, you split up. You split up the merch advance and so on and so on. We would live off of our advances. We really weren't selling enough records to pay back even the advances. I don't think any of those records on Island, at the time, even when we were selling gold records on "State Of Euphoria" and "I'm The Man" and "Persistence Of Time" and "Attack Of The Killer B's"… some of them went gold and some went platinum, but we weren't even paying back the advances we were getting. Record royalties was something that was really kind of nonexistent, but you would be able to get another publishing advance. You were constantly getting advances.

RockSverige.se: Do you remember when you started making decent money?

Scott: I didn't move out of my mother's apartment until sometime in 1986. I started the band in 1981, "Fistful Of Metal" came out in January of '84 and "Spreading The Disease" in early '86 and we started touring heavily. Even then, it wasn't like I was making a lot of money. I made enough money to pay a really cheap rent in a shitty apartment in Queens, but that was a big deal for me, to be able to move out of my mother's apartment when I was 22 years old. And my only job was being in a band; it's not like I worked another job. As far as making good money, for me it wasn't really until 1991. I remember we did the "Clash Of The Titans" tour in the States with SLAYER and MEGADETH and that was the first time we even made money on tour. That's the way it was. I remember I came home from the tour and there was a check, and I was confused. I went, "What is this for?" and they said, "It's the profit from the tour." And I was, like, "There was a profit? Really? We didn't spend every dime?" Sure, we were selling records, but back then in the '80s, you would sign these major label deals, but you weren't hardly making any money off of those albums. You would get a big check in advance and then that would be it, unless you were an arena band, but we weren't that. In the world of metal, it's not like it's the most financially fruitful genre of music. On the list of genres, it would be way, way down at the bottom, of as far as which type of music am I gonna pick to try and make a living at. Other than some bands, to try and make it as a metal band, it's fucking insane!