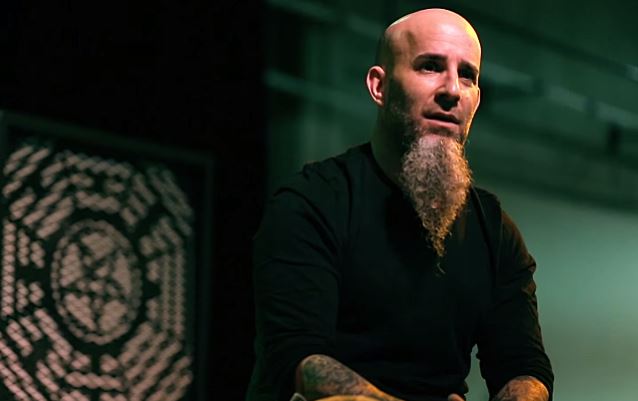 In an interview with Musician's Friend, ANTHRAX guitarist Scott Ian looks back on a career of plaster-shattering landmarks. Check out the clip below.

Speaking about the difficulty of breaking into the music business in the 1980s, Ian said: "I can't say it was great in the '80s. It's the music business. It's never been populated by like-minded individuals — meaning the people running the businesses aren't your 'bros' in the bands. Most labels were still actually run by 'record men,' people who actually understood music. And the philosophy was you developed the band over a course of four or five records. And then, hopefully, they would have a gold record."

He continued: "None of these bands made it on their first album, or even mostly their second album; it was on their third or fourth record when most bands started their careers. And then people [would] go back and buy the earlier stuff. It was few and far between that you would get bands that blew up on their first record and never looked back."

Ian added: "These legendary guys that were running labels from the '60s, '70s and '80s, they were all put out to pasture and the accountants took over and that all changed. And then it became, 'Well, you get one record.' And then, from one record, you get one single. Which didn't really affect bands like us, 'cause we're not radio anyway. So we never had to worry about that at least. For bands these days, I don't even know how it works. If you're on a major… I don't think majors are signing rock bands anyway."

ANTHRAX, along with producer Jay Ruston, is currently in a Los Angeles studio recording the follow-up to the band's 2011 Grammy-nominated, critically acclaimed album "Worship Music". The group — Charlie Benante (drums), Frank Bello (bass), Joey Belladonna (vocals), Scott Ian (guitar) and Jon Donais (guitar) — has been writing and demoing new songs over the past few months and plans to continue recording for the next several weeks. The band's as-yet-untitled eleventh full-length effort is tentatively due this summer via Megaforce.