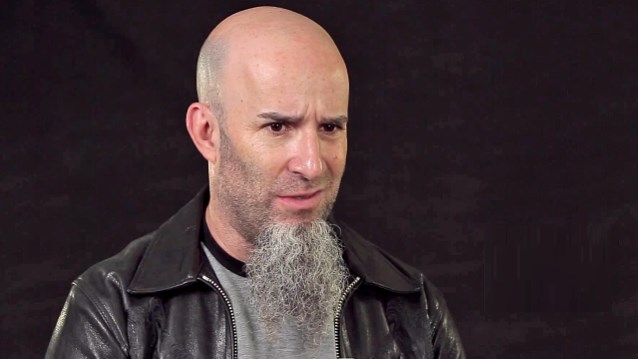 TENACIOUS D was honored with a Grammy in the "Best Hard Rock/Metal Performance" category in the pre-telecast ceremony at the 57th annual Grammy Awards, which was held on February 8 at the Staples Center in Los Angeles. TENACIOUS D was nominated for its cover version of the DIO classic "The Last In Line", from the "Ronnie James Dio - This Is Your Life" tribute album, 100% of proceeds from which go to the Ronnie James Dio Stand Up And Shout Cancer Fund.

TENACIOUS D beat out several notable metal acts, including ANTHRAX, which was nominated for its own contribution to "Ronnie James Dio - This Is Your Life", a cover of the BLACK SABBATH classic "Neon Knights".

Speaking to Artisan News, ANTHRAX guitarist Scott Ian was asked about the grumblings of discontent in the metal community after TENACIOUS D — which is essentially a comedy rock duo — getting the "Best Hard Rock/Metal Performance" nod.

Commented Wendy Dio: "We are so excited to see one of Ronnie's songs be awarded with a Grammy.

"As soon as TENACIOUS D were announced as winners, Jack Black called me in excitement to tell me that we won the award. My only regret is to not have Ronnie here in body to see this happen."

Added Jack Black and Kyle Gass of TENACIOUS D: "This Grammy is all about Ronnie James Dio. We are so proud to have known Ronnie and this is just another testament to his greatness."

"Ronnie James Dio - This Is Your Life" was released in April 2014 via Rhino.

"Dio was the master," Jack Black told Music For Good. "He was the Pavarotti of heavy metal vocalists. [He had] soaring melodies and a lion's roar to match. He was also one of the coolest guys I've ever had the honor of meeting. No one could touch his brilliance… on or off the stage."

"It's hard not to pick a great Dio track… but this one appealed to us," Kyle Gass said of "The Last In Line". "Recording the track was a blast. Our electric guitarist, John Konesky, shredded a solo. I said, 'That's pretty good, but let's try out my recorder.' Lo and behold, it shredded even more and added a unique element to the track."

Gass fondly remembered Ronnie's cameo in TENACIOUS D's musical comedy film "The Pick Of Destiny", telling Music For Good: "Dio obviously has been a major influence and inspiration for the D. His performance in 'The Pick Of Destiny' was a magical moment for us, and we'll always miss him. Rock on, Dio."