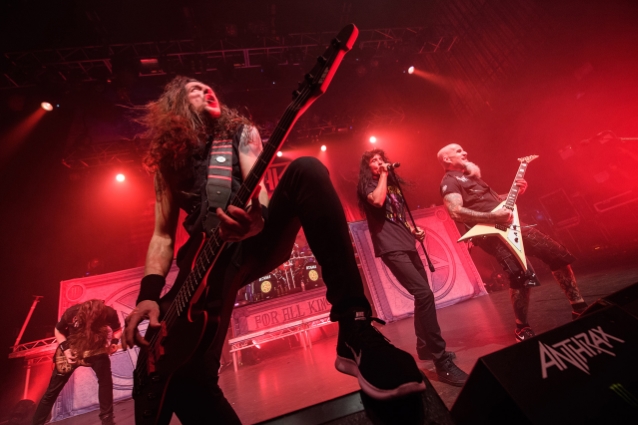 ANTHRAX bassist Frank Bello has told WRIF's Meltdown that there are no plans for the band to retire anytime soon.

"[It's] not even on the radar," Frank said (hear audio below). "Here's why: the last two records have been taken so well and people are reacting so well.

"Dude, you have an angry band there," he continued. "We are some angry muthas, we're some angry people, [and] there's a lot of energy going on.

"I can tell you with great certainty: we're ready to go. We are having fun and the band is getting along better than ever. And we're just having a raging time. And I'm really excited to see what comes up next for ANTHRAX."

Bello recently told Sweden's RockSverige that there was never a time when he felt he wanted to walk away from it all. "I've always wanted to play music," he said. "I remember when the grunge era happened in the '90s, and that was a rough era for metal, let's face it. It was a rough period and those were tough times, but at the same time, I couldn't wait to play, so I don't think there's ever been a time I didn't wanna play. I enjoy the experience of connecting with people with music. It's why I'm here. I need that energy."

ANTHRAX's latest album, "For All Kings", was released in February 2016. Its arrival followed a five-year period during which the band experienced a rebirth of sorts, beginning with ANTHRAX's inclusion on the 2010 "Big Four" tour with METALLICA, SLAYER and MEGADETH, and continuing with the 2011 release of comeback LP "Worship Music".

ALTITUDES & ATTITUDE, the project featuring Bello and MEGADETH bassist David Ellefson, released its debut album, "Get It Out", on January 18 via Megaforce. The follow-up to ALTITUDES & ATTITUDE's 2014 self-titled EP was once again produced by Jay Ruston (ANTHRAX, STEEL PANTHER, STONE SOUR), with Jeff Friedl (A PERFECT CIRCLE, ASHES DIVIDE) returning behind the kit.