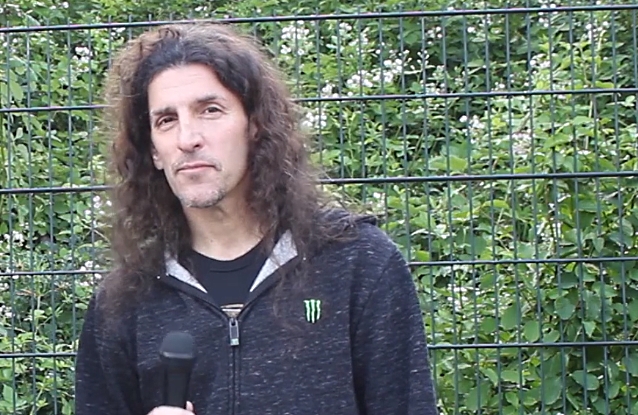 Moshpit Passion conducted an interview with ANTHRAX bassist Frank Bello about his ALTITUDES & ATTITUDE side project at this year's Rock Hard Festival in Germany. You can watch the entire chat below. A few excerpts follow (transcribed by BLABBERMOUTH.NET).

On whether it's difficult for him to write ALTITUDES & ATTITUDE songs compared to ANTHRAX:

Frank: "No. Not at all. You write what you write. Whatever comes out, comes out. I could write for ANTHRAX, that's the different, the heavier stuff. This is just rock and roll, just guitar and vocals, it's just based on that. With ANTHRAX, right now, we're writing an ANTHRAX record, I have stuff for that, I have riffs for that, music for that. That's on this side. It's easy to separate because I know when I'm writing stuff, 'This would be good for A&A.' The other stuff, the heavier stuff, 'This would be good for ANTHRAX.'"

On the songwriting process for ALTITUDES & ATTITUDE's latest album, "Get Out":

Frank: "I demo the songs at home. Literally, songs just come all together at once. Sometimes the lyric will start, sometimes the melody, sometimes the music, I'll get the whole music piece and hum a melody over it. I'll put it all on a demo. That's what I did with [MEGADETH's] Dave [Ellefson, bass]. I sent him and Jay Ruston, our producer on the record — he's also worked with ANTHRAX and STONE SOUR and everybody. I just sent them full songs that were ready to go. I said 'What do you think about this?' 'I love this. We got to do this.' It just worked out that way. It worked really well."

On the meaning behind the "Get Out" album title:

Frank: This is the stuff I've always had inside of me. I needed to get it out. Dave too, the same. You have this stuff you have inside you and you want to get it. I have to get this stuff out of me. I love what we do with ANTHRAX; I love the band ANTHRAX. In fact, we're writing a new ANTHRAX record right now. We're more excited than ever; we're psyched about the future with ANTHRAX. But the other stuff that I have inside me, I love singing. I have a good time with it. People seem to be liking the A&A stuff."

"Get Out" was released on January 18 via Megaforce, the follow-up to ALTITUDES & ATTITUDE's 2014 self-titled EP was once again produced by Ruston (ANTHRAX, STEEL PANTHER, STONE SOUR), with Jeff Friedl (A PERFECT CIRCLE, ASHES DIVIDE) returning behind the kit.