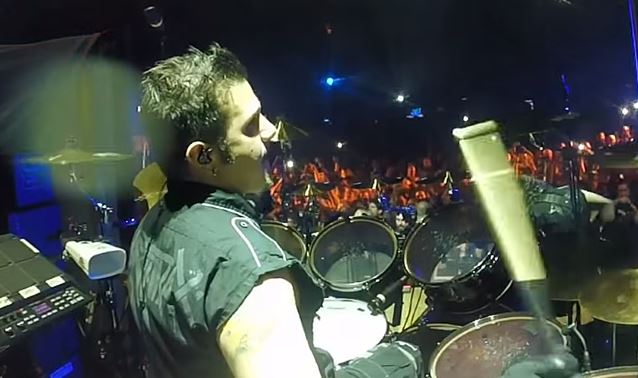 Drum-cam footage of ANTHRAX's Charlie Benante performing the song "A.I.R." with his bandmates this past Wednesday, July 29 at the House Of Blues in West Hollywood, California can be seen below.

Benante spoke to Metal Onslaught Magazine about the progress of the recording sessions for ANTHRAX's long-awaited follow-up to 2011's "Worship Music" album. He said: "I think its going to be released the beginning of next year. I would like to have this 'Spreading The Disease' 30th-anniversary [reissue] out at the end of [2015]. I think this album is going to take a little bit longer to finish and complete, because there is about 20 songs. The problem with having 20 songs is that you have 20 songs. It's not the problem that you have the twenty songs, it's just the problem that you have to complete the 20 songs. The bigger problem is that we do not know which ones we are going to choose. It's been taking a lot to really consider which ones are the best and which ones are [just] okay. So it's a hard decision to come up with. We are giving each song 100 percent, so that's why its taking a little longer to complete."

Regarding the musical direction of the new ANTHRAX material, Charlie said: "It's metal! It's definitely metal. I don't think we are really experimenting. We are not doing any dub step, we are not doing any waltzes or anything like that. It's strictly hard rock and heavy metal. Like the songs on the last record, if they were fast, these will be faster. [Laughs] So it's going to be that type of evolution. It's definitely something that has progressed really well."

Speaking about the lyrical themes covered on the new ANTHRAX album, Charlie said: "The way these songs are created, usually I will come in with the basic framework for the tune. And Scott [Ian, guitar] will take the songs and really put his lyric hat on. Sometimes we will discuss certain topics, like this aspect or that aspect, and it kind of comes like that. So some of these titles have deeper meanings, but they probably have more meaning to Scott. I always wondered about that, especially with RUSH, because Neil [Peart] is the lyricist of the band and how does Geddy [Lee, RUSH bassist/vocalist] then take it and sell it?"

ANTHRAX's new album, which is once again being produced by Jay Ruston (STONE SOUR, STEEL PANTHER), will include such songtitles as "The Battle Chose Us", "You Gotta Believe" and "The Evil Twin".

ANTHRAX recently completed a six-week North American tour with VOLBEAT. The band's setlist included the new song "Soror Irrumator (Lords Of The Rock)", ANTHRAX's contribution to the the second installment of "Catch The Throne: The Mixtape", for HBO's Emmy- and Golden Globe-winning series "Game Of Thrones".