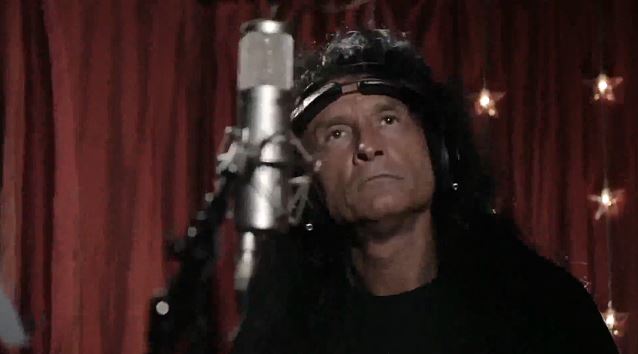 ANTHRAX, along with producer Jay Ruston, is currently in a Los Angeles studio recording the follow-up to the band's 2011 Grammy-nominated, critically acclaimed album "Worship Music". The group — Charlie Benante (drums), Frank Bello (bass), Joey Belladonna (vocals), Scott Ian (guitar) and Jon Donais (guitar) — has been writing and demoing new songs over the past few months and plans to continue recording for the next several weeks. The band's as-yet-untitled eleventh full-length effort is tentatively due in late 2015 via Megaforce.

A new video clip from the studio can be seen below.

Speaking to Revolver magazine, Benante stated about the songwriting process for the new ANTHRAX album: "Scott and I have this chemistry that works even when we don't know it's working. I'll be working on a song and then he'll send me a riff idea and it will fit perfectly with my part. I love those happy accidents. When you've been together as long as we have you start to think alike and you start making the same moves."

ANTHRAX has so far laid down six songs — including "The Battle Chose Us", "You Gotta Believe" and "The Evil Twin" — and plans on completing the first batch of tracks before moving on to the remaining 15 tunes.

"We recorded 'Worship Music' in sections because we had to, but some good things came out of that," Benante told Revolver. "So we decided to work in a similar way this time. Last time I did the drums for a lot of the songs and then moved on to other things, and when I listened back later to the original tracks, I felt like they weren't fully realized. So I went back and redid a lot of them and it made the songs more exciting. We wanted the opportunity to work that way again, only this time on purpose."

Regarding the musical direction of the new ANTHRAX material, Benante said: "We're continuing on the same path we were on with ['Worship Music']. Some of the songs are even more aggressive. Three or four are pretty thrashy, including one of the fastest songs we've recorded in years. When we did it, the mood was there and we were like, 'Fuck, this is awesome. Let's go with it.' [Another song] will probably be six minutes long and take you on a musical journey."

According to Benante, there is no set release date for the new ANTHRAX album. "We don't want to put any pressure on ourselves so we're not giving ourselves any deadline," he said. "We're taking our time with this, because we want to make sure we get it right."