After a critically acclaimed premiere on the inaugural voyage of MOTÖRHEAD's Motörboat alongside their recent addition as a co-headliner on Shiprocked 2015, Metal Allegiance will be bringing their musical crusade to stateside on January 21, 2015 at the House of Blues in Anaheim, California. A collection of heavy music's finest musicians will be reuniting for an all-star jam session as only these masters can. The lineup featuring Frank Bello (ANTHRAX), Charlie Benante (ANTHRAX), Chuck Billy (TESTAMENT), Chris Broderick (MEGADETH), David Ellefson (MEGADETH), Scott Ian (ANTHRAX), Andreas Kisser (SEPULTURA), Mark Osegueda (DEATH ANGEL), Mike Portnoy (THE WINERY DOGS), Troy Sanders (MASTODON), Alex Skolnick (TESTAMENT) and John Tempesta (THE CULT) will be performing songs throughout the history of hard rock and heavy metal along with plenty of surprises making this a night not to be missed.

"Like the running of the bulls in Pamplona, Metal Allegiance takes over Anaheim," states drummer Charlie Benante. "This will be a different show from any other jam we have previously done. It'll feature more versatility and a wider range of music."

"Metal Allegiance is one of the most musically fulfilling endeavors I've ever been a part of because it's all good friends playing our favorite songs together at any location in the world. It's like having a heavy metal brother from another mother," adds bassist David Ellefson.

Kicking off the night will be Scott Ian "Speaking Words", the successful spoken-word event which Ian recounts stories from throughout his legendary career. Ian just recently released his autobiography, "I'm The Man: The Story Of That Guy From Anthrax", and has been performing these spoken-word events around the globe in support of that release.

"Being a part of Metal Allegiance gave me the chance to hang one-handed from a palm tree to take a video of Alex Skolnick playing 'Eruption'," states Scott Ian. "Can't wait to do it again! (Metal Allegiance, not the one-handed hanging). See you all soon!"

Tickets for Metal Allegiance are $29.50 in advance/$32.50 day of show and go on-sale Friday, October 31. Tickets can be purchased link textvia Ticketmaster or at the House Of Blues Anaheim box office. 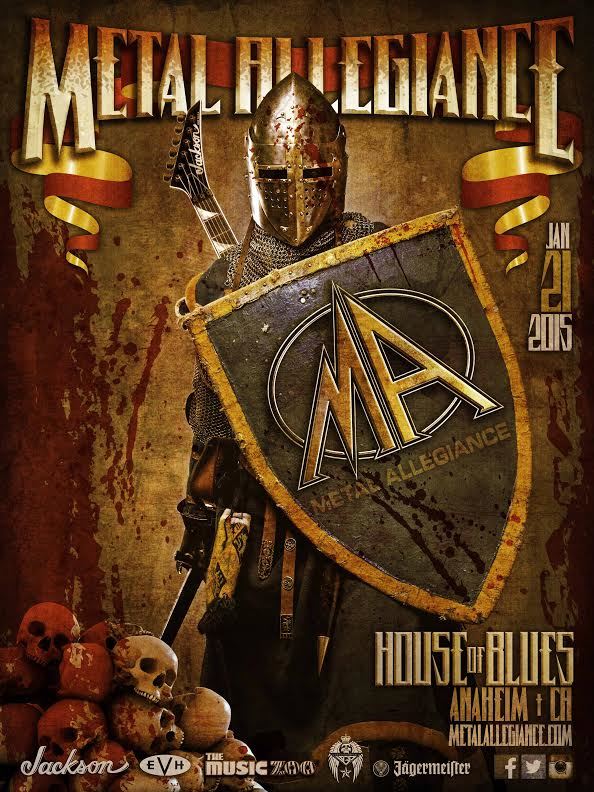