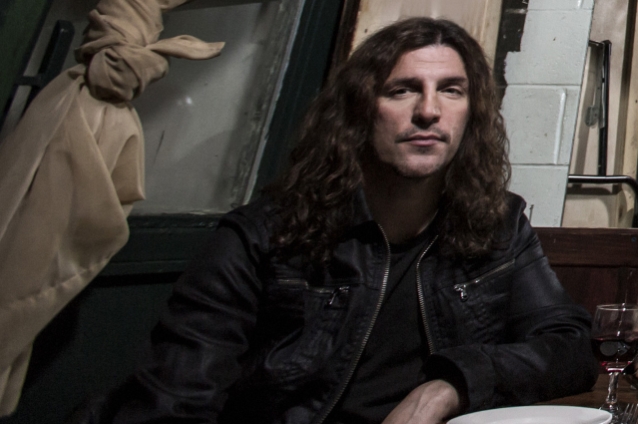 At this past weekend's Rock Hard Festival in Germany, ANTHRAX bassist Frank Bello spoke to WDR's "Rockpalast" about the progress of the songwriting sessions for the band's follow-up to 2016's "For All Kings" album.

"It's in the works right now, and we're very happy with what we've come up with," he said. "I'm an ANTHRAX fan — we have to be ANTHRAX fans in the band to put the music out we do — so I think, as fans, so far what we have we're very, very happy with. We're very psyched. It gets your gut going. I can't wait. I'm very excited."

According to Frank, it will still be a while before ANTHRAX is ready to enter the studio to begin recording the new disc.

He added: "We're gonna let it breathe. That's what we do — we write songs for a little while, we go on tour, and we live with the songs and let it talk to us. What it needs and making sure the songs are right."

ANTHRAX drummer Charlie Benante recently told Australia's "Everblack" podcast that the band's new music is shaping up to be "a little more in the aggressive style."

"For All Kings" was called by some critics ANTHRAX's strongest album to date. Its arrival followed a five-year period during which the band experienced a rebirth of sorts, beginning with ANTHRAX's inclusion on the 2010 "Big Four" tour with METALLICA, SLAYER and MEGADETH, and continuing with the 2011 release of comeback LP "Worship Music".

The group's upcoming disc will be ANTHRAX's third full-length release since the return of singer Joey Belladonna, who came back into the fold for the "Big Four" shows, in the process helping inspire a new wave of creativity.