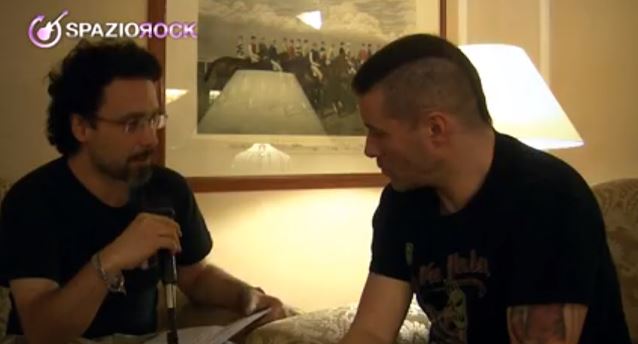 ANNIHILATOR filmed a video for the song "No Way Out" earlier this month in Hannover, Germany. The track comes off the band's 14th studio album, "Feast", which was released on August 23 in Europe and August 27 in North America via UDR. The deluxe eco-book version also features a bonus CD containing 15 of the best ANNIHILATOR songs re-recorded in 2012... a grand total of 24 songs in one package... with a 3D cover!

Jeff Waters and his bandmates tear through each release with honest, raw power and energy, along with excellent technical skill, giving the metal world the most-tasteful mixtures of huge, metal riffs with the idea of the perfect song and some legendary solo shredding as the icing on the cake. That's why Jeff and ANNIHILATOR have been a major influence on countless well-known metal acts and musicians around the world. Tours with everyone from JUDAS PRIEST to PANTERA to TRIVIUM, plus dozens of headlining tours and festivals around the world, have been going on steady since 1989 for this band; no rest as the demand for this band never ends.

ANNIHILATOR has been touted as one of the best live acts in metal music. High-end musicianship, tight playing and massive energy and fun are what these lads are known for. Their music? Honest, melodic thrash and heavy metal, combined with traces of blues, classical and jazz. Hell, there is even some death and punk in there, too.

Says Waters: "We truly are among the few bands with a long history that have always waved the flag for honesty, integrity and perseverance in this hard-edged category of music."

"Feast" will be made available in the following formats: