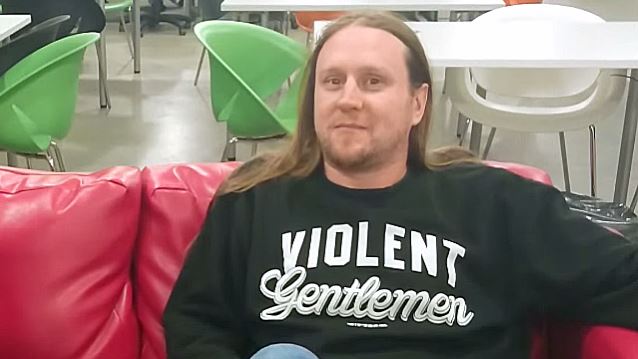 Mia Metall of Metal-Rules.com conducted an interview with bassist Ted Lundström of Swedish death metallers AMON AMARTH before the band's January 25 concert at Manchester Academy in United Kingdom. You can now watch the chat below.

Asked if recording new albums has become less important for AMON AMARTH than touring, Ted said: "No. I mean, you need to make albums to be able to tour. 'Cause if you don't come out with new albums, you can't go on tour that much. But today, with the business, the music industry, basically, you really have to tour to keep the band running financially. And we love to tour. We don't mind touring a lot. As soon as we're done with an album, we're looking forward to a year and a half, two years of touring."

He continued: "When we have time off, we have real time off, since we don't have any normal 9-to-5 jobs anymore. So when you're actually home, you can relax more. But we're on the road pretty much all the time."

AMON AMARTH's latest album, "Deceiver Of The Gods", sold around 17,000 copies in the United States in its first week of release to land at position No. 19 on The Billboard 200 chart. The record arrived in stores on June 25, 2013 via Metal Blade Records.