The mask was designed by artist David Arrigo and features a coyote on the front, the old Coyotes logo on the side, and Cooper on the back.

In an interview, Smith talked about the helmet. "I think it turned out unbelievable," he said. "It's very simple, it's very retro, and that's the theme we went with this time around. It's the old Coyote head with different things involved, obviously the whole head of the coyote and then the old logo on the side."

He continued: "Probably the coolest thing about the helmet is the backplate. It's a tribute to Alice Cooper. He's been a lifer as a Coyote fan and a big supporter of the team…

"[Arrigo has] been wanting to paint Alice Cooper on my helmet for quite a few years now and finally I let him have at it. Obviously it's an amazing tribute to Alice and the support he gives our team, and a throwback to him."

Said Arrigo about the mask's creation: "With EVERY mask I work on with Smitty, there will be… let's say, some locking of the horns and this piece was no different.

"Smitty was looking for a clean break all around, including the backplate. In contrast, I push as much as possible to have something on the mask that have people look twice. He wanted the Coyotes moon logo vs. I was looking for something more entertaining and had a punch. Enter Alice Cooper, rock star, Arizona resident and Coyote fan.

"What is more retro than Alice Cooper!

"I thought the image of Alice's unique look on the backplate would really make this a conversation piece (not to mention I think it would look cool as heck!). For once I got my way! I think it worked out well." 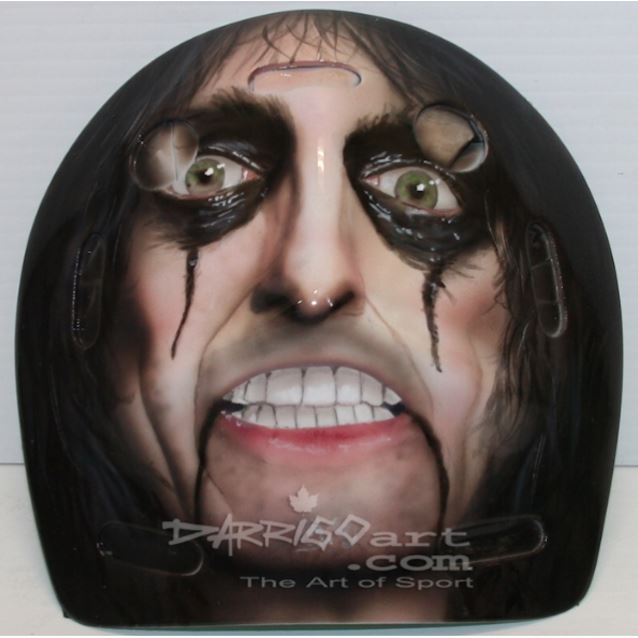