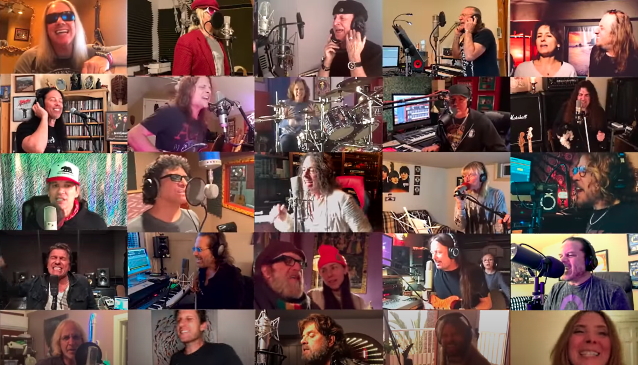 WINGER recently invited artists, friends and fans to sing along to "Better Days Comin'", the title track of the band's sixth studio album, which was released in April 2014 via Frontiers Music Srl.

The accompanying music video, which can be seen below, features the following guest artists in order of appearance:

In a 2014 interview with Metal Talk, WINGER frontman Kip Winger stated about the "Better Days Comin'" title: "Well, it's funny. It's more of a sarcastic title, actually. There's so much shit going on in the world that there's gotta be better days comin', basically. How much further down can you go? So there is an element of sarcasm to it, but the song is a feel-good song. The actual track 'Better Days Comin'', it was our answer to 'Down Incognito'. When we wrote that, we were thinking that might be a good name for the album 'cause it's so fresh. There wasn't any huge concept behind it or anything like that."

Elaborating on the "Better Days Comin'" lyrics, Kip said: "It is generally a happy song. Basically, like, just forget about your troubles because there's plenty of them. It is very '70s. We had trouble finding out which era it actually came from because the verse is — well, it's not really a '60s-sounding verse, and when you hit the chorus, it sounds like it could have been EARTH, WIND & FIRE or something. That's just the way it happens with Reb [Beach, guitar] and I — we follow on to certain things, and right out of nowhere, we have this wacky song and we don't know where it came from. Like I say, it was really our answer to 'Down Incognito', because we wrote the whole record, and I thought we need an up, funky song like 'Down Incognito', so we wrote that."