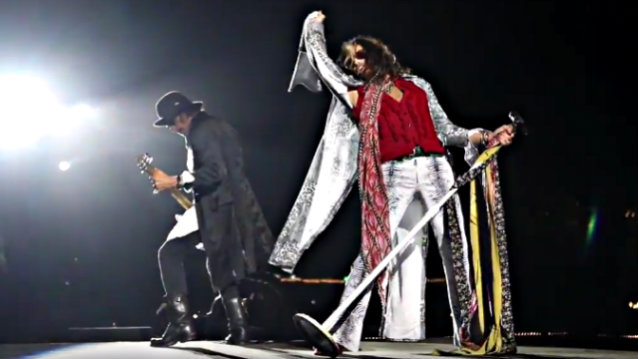 Legendary rockers AEROSMITH have posted video highlights of the band's recent shows in Tel Aviv, Israel (May 17), Batumi, Georgia (May 20), and Moscow, Russia (May 23). Check out the clips below.

AEROSMITH guitarist Joe Perry recently told the Associated Press that the band will continue playing until at least its upcoming fiftieth anniversary, which the band will celebrate in 2020. "I thing that we're gonna keep going," the guitarist said. "The way it looks to me is the band is gonna stay pretty active over the next few years 'cause our fiftieth anniversary is coming up in two years, of when the band got together, and we'd like to see that happen."

Added singer Steve Tyler: "I don't know if it'll continue forever, but as long as the band is playing the way it is right now, it's gonna be for a long time."

Perry previously told The Arizona Republic that he wasn't ready to walk away from the band. He said: "No. It's like, try and picture your last meal. You're only gonna eat so many times in your life. You're gonna sit down at the table 258 million times. There's a finite number of times you're gonna do anything in your life. To picture a final AEROSMITH gig, it's like… I can't do it. There's too much of that 'rock until you drop' ingrained into this band. But we're at the end, so who knows how long it's gonna go?"

AEROSMITH launched its "Aero-Vederci Baby!" tour on May 17 with the band's first show in Israel in more than 20 years. Roughly fifty thousand fans turned out to see the group perform at Park HaYarkon in Tel Aviv.

Speaking to NME on May 27, Perry explained that the band had had a change of heart over its farewell tour. "We thought it was gonna be a good idea when we first started plotting the European run," he said. "We're gonna do South America and the States for five months and we thought, 'Well, we're getting near the end here.' We don't know when the tour is gonna end, but we know there'll be a last gig of this tour. We all have lives outside of the band. We grew up together, went from being kids in the apartment to a long and storied career, so we thought, 'It's time.' Then we were in South America doing interviews and we couldn't fuckin' say it, that there was gonna be a last gig. We were looking at each other going, 'Really? Are we really gonna say this is the farewell tour?' So we kinda changed our minds. Will the band be together in a year? We'll do everything we can to make sure it is, but God may have other plans. Judging by how he's treated us over the last forty-eight years, I'd like to think he's gonna let us see fifty, but you can't guarantee that."