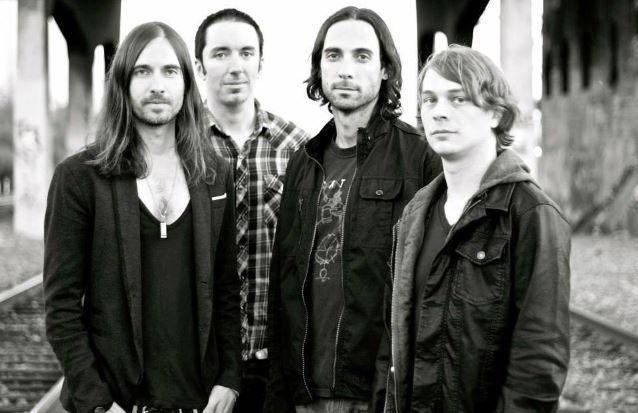 ÆGES has inked a world-wide deal with Another Century. The band is currently in the studio with producer Bob Marlette (BLACK SABBATH, SHINEDOWN, ROB ZOMBIE) recording its third album for a fall release.

ÆGES melds riffs that echo from California desert sand and imbues them with a post-hardcore angst and the smarts of the most challenging of '90s alt-rock. It's no surprise that ÆGES is the juncture of a band whose current members have helmed such a diverse array of bands as 16, THE RISE, CUTTHROATS 9, JULIETTE & THE LICKS and UNWRITTEN LAW.

ÆGES guitarist/vocalist Kemble Walters states: "We're all excited to announce our signing to Another Century. We've seen what they've done with their other artists and can't wait to see what they've got planned for us.

"We are currently in the studio with Bob Marlette making a slamming record. We definitely didn't skimp out on the nasty riffs and fat hooks!

Adds drummer Mike Land: "We're thrilled to be partnering with Another Century.

"As a band, we're looking forward to recording the biggest and best ÆGES album to date.

"We've written a diverse array of songs for this release; from heavy and chaotic, to soulful and atmospheric. We feel that our fans, both existing and new, will be able to find something timeless in the new material."

ÆGES has shared stages with a spectrum of bands that runs the gamut from THRICE and COHEED & CAMBRIA to BLACK BREATH and BUCKCHERRY.