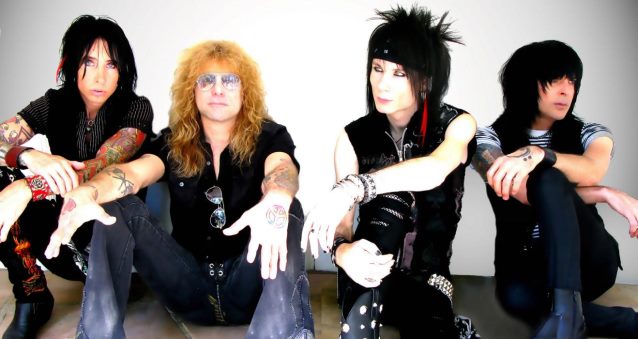 ADLER, the band led by original GUNS N' ROSES drummer Steven Adler, will have its music featured in the pilot and future episodes of "Sex And The Single Vegan", a half-hour, single-camera comedy created by Los Angeles-based writer, actor and producer Joanne Rose.

"The sitcom is about finding your identity," says Rose.

Lead character Jennifer Richards (played by Joanne Rose) loves sex, is a vegan and loves blogging about it all. She's in her 30s and sees her friends getting married and choosing a clear course in life and here she is blogging about her terrible dates. "She is actually driven by a deep fear of life passing her by and the one thing she won't compromise, however, is her independence and ideals," continues Rose.

When a top-notch pastry chef named Michael Pierce comes crashing into her life, he is everything she dislikes. "He's arrogant, yet annoyingly sexy but not a vegan," Rose says. "This is a huge driver for Jennifer and each week we'll get to see that tension play out as she dives in head first with her career, her dating blog, her anti-Michael rants, when all her body is telling her is to screw his brains out and be the mother to his kids."

Vegan Vision Productions has teamed up with Rawkn Music, a music placement division of Rawkn Management, with top-tier talent, owned and operated by Rob Adams and Walter Tabayoyong.

"It's our sincere privilege to have the opportunity to collaborate musically along with our client Steven Adler for the 'Sex And The Single Vegan' project," says Rob. "We, along with Steven, are animal advocates and look forward to a continued relationship in the pursuit and awareness of animal causes. We look forward to working on future endeavors with Joanne, to bring great talent and music to great shows."

Joanne Rose, who originates from Melbourne, Australia and is now a permanent U.S. resident, formed her own production company, Vegan Vision Productions, five years ago.

Rose launched her career online with her U.S. comedy web series "Vegan 101", which ran for three seasons. The series featured Rose in highly exaggerated stories about vegans from all walks of life through comedy sketches.