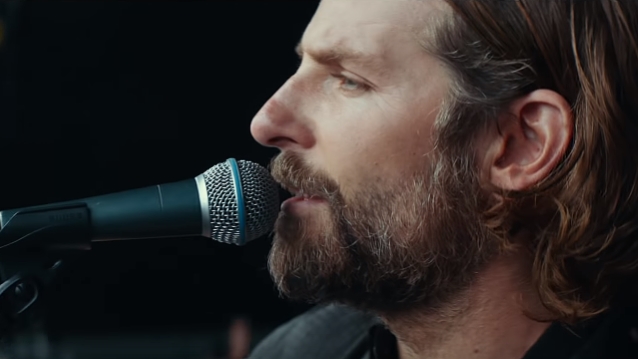 Actor Bradley Cooper has revealed that the look of his new film "A Star Is Born", which he co-wrote and directed, was inspired by a METALLICA concert.

"I'm a huge fan of METALLICA," he said. "About six years ago I was at METALLICA concert [standing behind the drum kit] and I saw the scope of it… and thought, wow, this composition is incredible and that's what it feels to be on stage, to be a rock star… So in the movie you're always on the stage."

A remake of the 1937 film of the same name, "A Star Is Born" stars Cooper as an alcoholic musician who discovers, and falls in love with, a struggling young singer played by pop superstar Lady Gaga, who co-wrote the film's original music with Cooper and a team of songwriters that includes Mark Ronson.

Back in 2013, METALLICA drummer Lars Ulrich said that he had become "good friends" with Cooper. "[He is a] huge METALLICA fan," Ulrich told HuffPost Live. "[He] actually flies and comes and sees us play if he's got a day off. Like, 'Where are you playing a gig?' And he'll jump on a plane and bring his lady [Suki Waterhouse] and hang out."

Cooper was reportedly spotted at METALLICA's very exclusive concert during the 2013 Comic-Con at the Spreckels Theatre in San Diego, California.

Last year's METALLICA/Lady Gaga collaboration at the Grammy Awards was borne out of a chance meeting between the pop superstar and Ulrich at Cooper's house.