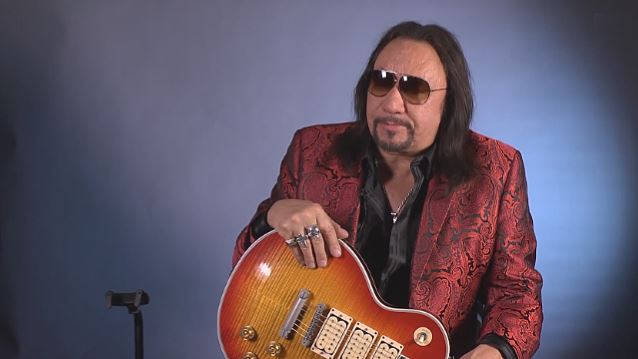 Original KISS guitarist Ace Frehley spoke to Billboard.com about his next project, a covers disc which is tentatively due before the end of the year. "The album's going to be about my influences," said Frehley. "I'm probably going to do a ROLLING STONES song, a WHO song, possibly a LED ZEPPELIN song, maybe a BEATLES song. Stuff from bands that I grew up on and greatly influenced me. Those are the songs I'd redo, besides vintage KISS stuff and a FREHLEY'S COMET track."

The set will "probably" include Frehley's versions of the KISS classics "Cold Gin" and "Parasite". "On KISS records, I'm not singing lead. So I'm going to sing lead on them like I do live so there's [studio tracks] out there with me," Ace said.

Frehley said that he has approached Lita Ford, Slash (GUNS N' ROSES) and Mike McCready (PEARL JAM) about making guest appearances on the CD. "I was actually going to ask [KISS bassist/vocalist] Gene Simmons to play bass on a track and sing with me. I haven't gotten to that stage yet," he said.

With all the back-and-forth in the media between Ace and his former KISS bandmates over the past year, VH1 Radio Network asked Frehley if he thinks Gene would accept his invitation to appear on Ace's covers album.

"I think he'd consider it," Ace said. "I don't know if he'd do it. Maybe [KISS guitarist/vocalist] Paul [Stanley] won't let him. Who knows?"

In an interview with The Tampa Tribune, Simmons was asked if KISS would ever consider reuniting with Frehley and original drummer Peter Criss "if they ever cleaned up their act." "Not a chance," he replied. "We've already danced that dance three different times. No way will we reunite. It wouldn't be fair to [current KISS members] Tommy [Thayer, guitar] and Eric [Singer, drums]. It wouldn't be right."

Although all four original members of KISS came backstage at last year's Rock And Roll Hall of Fame induction for photo ops, Frehley was the only member to come back and talk to the press. Asked how he felt about Ace speaking to the media after KISS posed for photos as a group, Gene said: "His demons are his own. He leads a Jekyll-and-Hyde sort of existence. He has a new album coming out, and I wish him well. I wish Peter well, too."