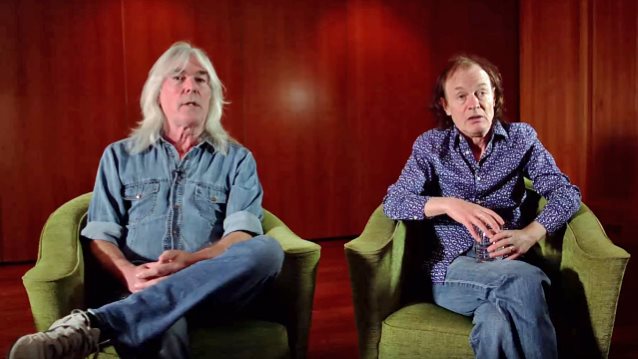 "The band energy is really up there," said Cliff. "It's doing really well. We've thrown some different songs in, which is kind of always good [and] interesting; it changes it up for us and the audience. But the band is playing great. It's a good feeling up there right now."

"With Axl, we've been able to mix up quite a few songs, do a few older ones and put them, which we haven't done in a number of years," added Angus. "We always used to kind of get a setlist, and that would be [it] for a tour. So now we've got a lot more adding and putting in different tracks, and the fun part is when we get there on the stage, and seeing it come to life in front of the audience and seeing the reaction."

According to The Pulse Of Radio, the first rescheduled dates of AC/DC's North American tour — which will be the band's first concerts here with Rose on lead vocals — have begun to surface. The group will kick things off at the BB&T Center in Sunrise, Florida on August 30, just one week after Rose completes his summer stadium run with GUNS N’ ROSES. AC/DC will also perform at Madison Square Garden in New York on September 14, with more dates expected to be confirmed soon.

AC/DC will make up the ten shows it was forced to cancel earlier this year when singer Brian Johnson had to abruptly come off the road or face total hearing loss.

The group recruited Axl Rose for 22 shows, including a dozen stops in Europe. There are four dates left on the European run.

Young said recently that he's not sure what AC/DC will do after wrapping up its current tour, remarking, "We were committed to finishing this tour, so that's been our main goal, and Axl's helping us. I know he's very excited. He keeps saying, can he do more? But we don't really know at the end how we will [proceed]."