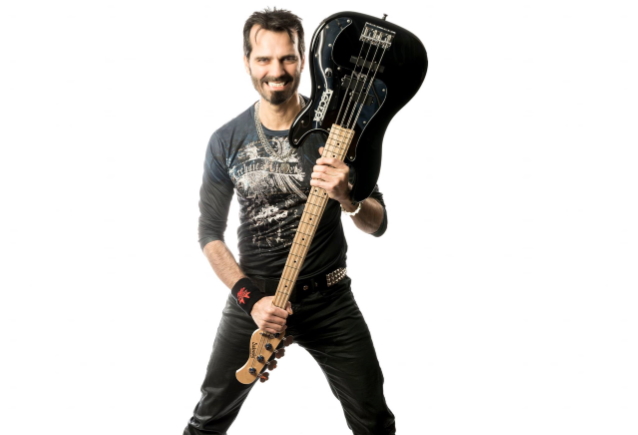 Martin Motnik, bass player for German pioneers of heavy metal ACCEPT, is currently finishing up his second solo CD. His album consists of 10 bass-centric songs, with each song featuring a solo by a prolific guest musician:

Like on Martin's first solo album, "Bass Invader", which featured Gregg Bissonette, he is again relying on world-class drumming, this time by:

Motnik will release the album on his own record label, Kintom Music, and has started a crowdfunding campaign to give fans the opportunity to get their own name attached to the project.

Contributors can get their names in the album credits, and perks range from pre-release mp3s and signed CDs to video shout-outs and one-on-one calls, executive producer credits, a gold record, and ownership of the master files as NFT.

The Indiegogo campaign has already gained momentum and is ending on October 10. It can be found at this location or via www.motnik.com. The page has all info about the project, song excerpts and a two-minute video of Motnik talking about the motivation behind the album.

Born in Ludwigshafen, Germany, Motnik has been playing music since he was seven years old and has been a member of several bands, both in Germany and the United States. He was asked by Uli Jon Roth to join him for his 2008 U.S. tour and again in 2009 and 2012. In addition to his musical talent, Motnik also has a Master's Degree in business from the University of Mannheim.

In a recent interview with Vinyl Writer Music, Hoffmann called Motnik "a fantastic songwriter. He really contributed some stuff [to ACCEPT's latest album, 'Too Mean To Die'] that nobody expected because we took him into the band as a player, not so much as a potential songwriter. I mean, you always hope that somebody will and wants to write, but you don't know until you actually start doing it. So, when the songwriting time came, I asked and invited everybody to contribute stuff and Martin really came around."

Motnik stepped into ACCEPT following the 2018 departure of ACCEPT's founding bassist Peter Baltes. Hoffmann told Vinyl Writer Music how Martin came to join the band: "Obviously, he's a different player from Peter and we weren't trying to find a Peter clone or anything, and couldn't expect that. But he's really a tremendous player. We hooked up in Nashville because Martin had heard that Peter had left the band. So he sent us his contact information, and he happens to be a German living in Nashville, which is kind of a rare thing. So, now at least we kept a contingency of Germans in the band, which is good. [Laughs]. But that wasn't the only criteria. Obviously, he's a super-nice guy and his personality really fits well. So, he's an awesome player, a great personality, and a good songwriter. Pretty much all you can ask for. It's great."