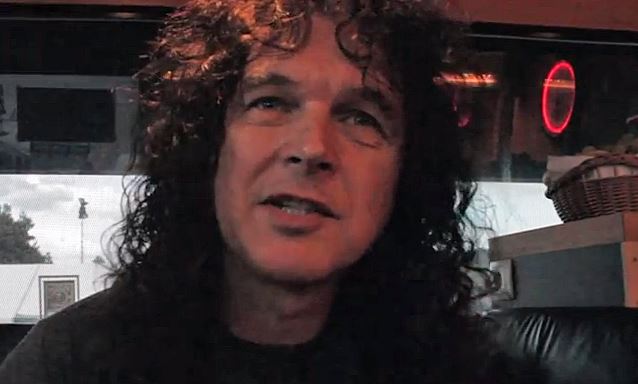 Elliot Paisley of EQPTV conducted an interview with bassist Peter Baltes of reformed heavy metal legends ACCEPT on August 9 at the Bloodstock Open Air festival at Catton Hall, Walton-On-Trent, West Midlands, United Kingdom. You can now watch the chat below.

Asked about the status of the songwriting and recording sessions for ACCEPT's follow-up to 2012's "Stalingrad", guitarist Wolf Hoffmann told Metal Shock Finland: "Our upcoming album is hopefully going to be out next year. We've started working on writing some songs; we haven't recorded anything yet. But over the winter — maybe early next year — we'll start recording it and try to make it every bit as good as the last one, maybe even better, if we succeed, we'll see... It's going to be as heavy as the rest."

"Stalingrad" was released on April 6, 2012 via Nuclear Blast Records. The CD was once again helmed by British producer Andy Sneap (MEGADETH, EXODUS, NEVERMORE, ARCH ENEMY), who worked on the band's critically acclaimed comeback effort, "Blood Of The Nations".