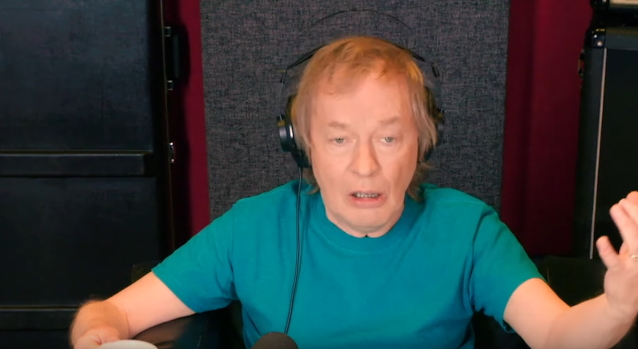 AC/DC's Angus Young and Brian Johnson join Zane Lowe on Apple Music's Essentials Radio to discuss their most celebrated songs, like "Highway To Hell" and "It's A Long Way To The Top"; one of the most successful albums of all time, "Back In Black"; dealing with the loss of bandmate and lead vocalist Bon Scott; and the addition of Brian to the band. You can now watch highlights from the chat below.

Speaking about how AC/DC was affected by Scott's untimely 1980 death, Angus said: "It was like it put you in shock, because you always kind of think the people around you and being young, you have that thing of you're almost kind of fearless and a little bit of... I don't know what it is when you're in your youth — you don't think of dying. And so it was a kind of shock to us all and it affected everyone in different ways. But the one element of it that held it probably together for me is [founding AC/DC rhythm guitarist and Angus's brother] Malcolm, because after a few weeks, he called me and he said, 'What are you doing?' And I just said, 'I'm just moping about it, Mal.' And he said, 'Listen, why don't the two of us do what we were doing before?', which was we'd been in a rehearsal room. It's strange — that was one of the last places that we had seen Bon, was in the rehearsal room. And he said, 'Why don't the two of us go back to that and just work on songs and ideas and just sit and do that?' And I thought, 'Okay, I'll give it a shot.' So that's what the two of us did that kept us going through the whole process, because he said, 'We won't think of anything. We'll just do that. We won't think of what we're going to do. We'll shut off managers and record people and whatnot. We just shut all of that away and just concentrate on, focus on doing these song ideas.' And that's what we did."

Scott was invited to join AC/DC by Malcolm and Angus Young in 1974, and achieved international stardom before his death at the age of 33 from alcohol poisoning.

Scott died of acute alcohol poisoning after a night of heavy drinking at a club in London, just days after attending a session with Malcolm and Angus Young where they began working on music for what became the "Back In Black" album.

According to the AC/DC FAQ web site, Bon and the friend, a musician named Alisdair Kinnear, had been drinking the evening of February 19, 1980 and Bon apparently fell asleep during the ride home. Kinnear could not wake Bon, so he left him in the car to sleep. Kinnear awoke early in the evening on February 20, checked on Bon, and found him unconscious in the car. Bon could not be revived, and was pronounced dead.

Angus told The Pulse Of Radio a while back that the band almost didn't get past Scott's death. "Bon was the big… He was a full-on frontman, plus he had this great character, you know. I mean, he just lived that rock 'n' roll life. With Bon, what you saw was what you got, and, yeah, it was pretty, pretty tough."

In a 2010 interview, Angus stated about Bon's influence on the band more than three decades after the singer's death: "I think it's just something that is part of you. It's like you lost someone close to you, in your family or a very close friend. You've always got that feeling they're there but you just, I suppose, miss them in the physical sense. There's always memories that keep coming back to you, and it doesn't matter what the situation is. You could be traveling, you could be relaxing somewhere, or going to play or being in the studio, there's always something that reminds you."