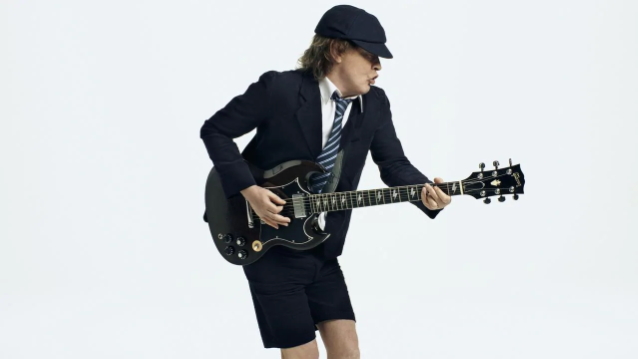 In a recent interview with Australia's Triple M radio station, AC/DC guitarist Angus Young spoke about the inspiration for the title of the band's latest album, "Power Up". He said (hear audio below): "I went through everything — like titles in songs. In the song 'Realize', there's the line, 'I've got the power to mesmerize.' The word 'power,' it goes back to the name AC/DC. We always looked at ourselves as that of power, electric power. So I just wanted another, if you could say, okay, what could you call AC/DC, and you say they're power. And I just thought something positive: power up. When we get on a stage, we plug in the guitars and everything powers up when we're out there."

Angus's latest comments echo those he made in a recent promotional video in which he stated about his decision to about the name the LP "Power Up": "It was just a good title to sum up the album. We wanted something that summed up the band." With AC/DC literally meaning "alternating current/direct current", Angus said he wanted a title with the word "power" in it, "and 'Power Up' seemed pretty positive."

"Power Up" is a tribute to Angus's brother Malcolm Young, who died in 2017 from effects of dementia at age 64. Malcolm is credited as a writer on all 12 tracks on "Power Up", along with Angus.

"Power Up" is available in multiple configurations, including digital, CD, and deluxe versions. The limited edition, one-of-a-kind deluxe "Power Up" box is the ultimate fan package. Hit the button on the side of the box and watch the flashing neon AC/DC logo light up while the opening bars of "Shot In The Dark" blast out of the built-in speaker. Inside the box is the full CD package in a soft-pack with a 20-page booklet that features exclusive photos and USB charging cable allowing the box to remain powered up and on display. The vinyl LP was pressed on 180-gram vinyl and housed in a gatefold jacket. Limited-edition variants of the LP are available at select retailers nationwide, as well as the band's online store.